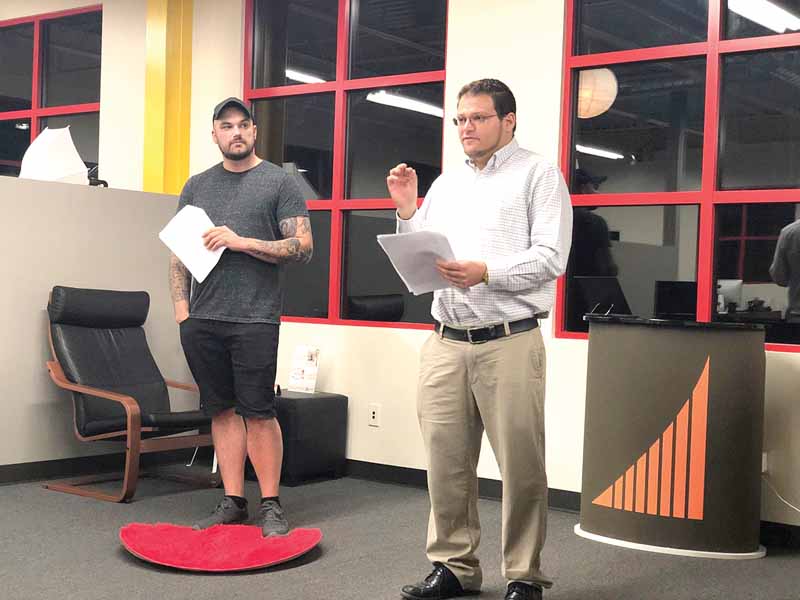 By Christopher Birsner – September 6, 2019 – Originally from the Farmingdale Observer

George Andriopoulos, a Farmingdale resident and founder of Launchpad Five One Six on Broadhollow Road, has been a keynote speaker for TED Talk conferences twice now and has been obsessed with TED Talk since he got into it a few years ago. So it was a dream come true when he was approved to do a TED Talk conference in his own town.

“It started last year with applying and I got my first application rejected,” said Andriopoulos. “I redid some things and tried again. I got approved and we were on our way.”

The theme of TEDxFarmingdale is “Fixing The World,” dealing with all sorts of issues on the macro and micro level, and presenting ideas on how to tackle them. In all, there will be about 24 talks over the course of the seven-and-a-half hour event. The speakers range from local residents to major people in the speaking world. Some have plenty of experience speaking, while others are brand new to the stage. It’s a local affair for Andriopoulos as well as 10 of the 26 total speakers have a connection to Farmingdale.

“When we were choosing speakers, we wanted to have that broad range of speakers but we also wanted to pay homage to Farmingdale as well,” said Andriopoulos. “We have our fair share of Dalers participating, from those who live here now or those that were just raised in the town.”

Some specific examples of speakers include Dr. Jennifer DeHayes, assistant principal of Woodward Parkway Elementary School, who will present a story about how trust has affected her personal and professional life. James Hughes, a teacher at Farmingdale High School who is blind, makes the argument that the world is fine the way it is, but it needs more acceptance. Two students from the Farmingdale School District will be speaking as well, Elise Atkins and Nicole Varriale.

“Looking at the genesis of this event and who I wanted to speak here, I said to myself that I want people that I know will have something to say but don’t have that voice quite yet,” said Andriopoulos. “I hoping to take these 26 people and come out of this event with 26 leaders that are going to make some change.”

The event will be held on Saturday, Sept. 7 at Farmingdale High School from 9 a.m. to 4:30 p.m. For more information, visit www.tedxfarmingdale.com.

What did you think of this article? Share your thoughts with me by email at: cbirsner@antonmediagroup.com.