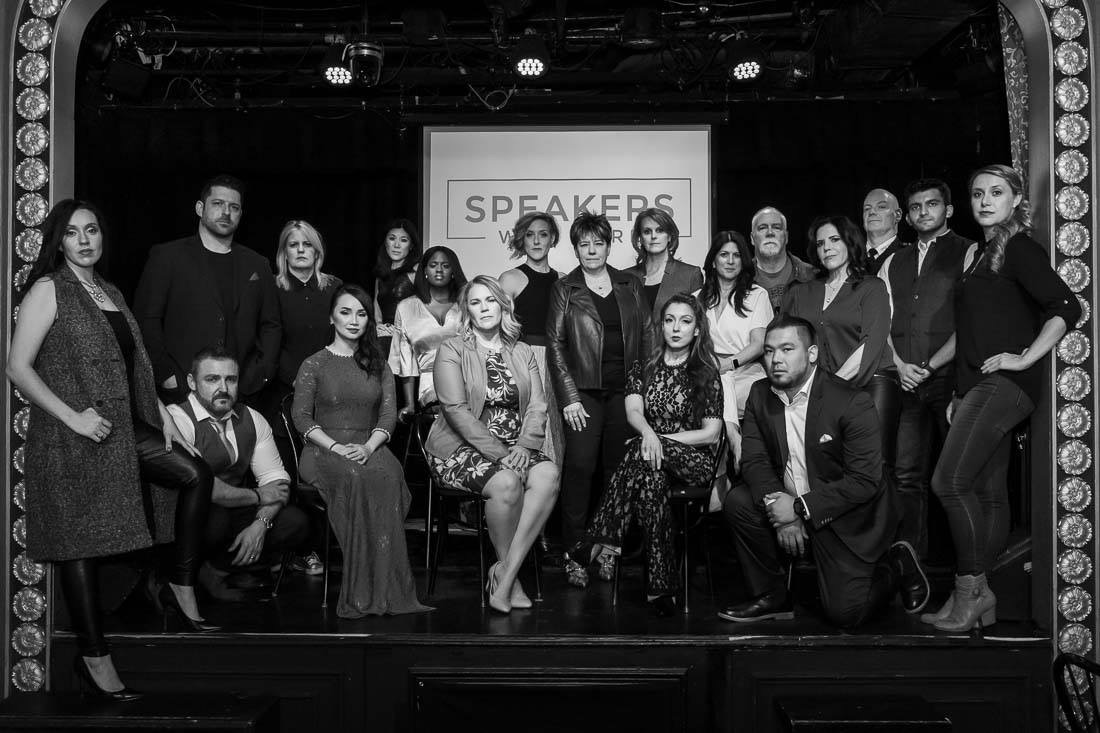 To Launch A Speaker Series Curated Like A Broadway Show

Thrilling, daring ideas are thought of every day. Many hope to share these ideas, beliefs, values or passions with others. Now they can. Former TEDx Producers, Tricia Brouk and Jamie Broderick, have partnered with Iman Oubou, CEO & Founder of SWAAY, to produce Speakers Who Dare – SWAAY The Narrative, a groundbreaking speaker series curated like a Broadway show. Out of a sea of applicants, they will be featuring 20 people with big ideas from across the country.

The inaugural event will take place on March 26, 2019; standup comic, Terri Trespicio, will be hosting. “There’s so much conversation that needs to be had, especially those daring conversations, so we’re excited about this,” Broderick exclaims. This dynamic duo combines intellect with creative content. Broderick is a visibility strategist, business-building mentor and has ignited the start and growth of many businesses. Brouk is an award-winning director and producer who help speakers bring the art of performance to talks. Together they make quite a team. They sat down with SWAAY to share their excitement and what they’re looking forward to.

“We’re constantly thinking about how to improve, change the narrative, make a difference in the world and give women voices as well,” Brouk comments.

Their journey began during their days at TEDxLincolnSquare, where Brouk was Executive Producer and Broderick was Co-Producer. “When Jamie and I came together for the first TEDx, it was called, Risk Takers and Change Makers,” Brouk begins. They swiftly answer questions, based on one another’s responses. “The last two shows we did for TEDx were sold out and people just could not talk more highly about them,” Broderick chimes in. “They were incredible, so we’re just taking it up a few more notches from there.” After retiring from TED, they decided it was the perfect transition into Speakers Who Dare. As daring women themselves, they wanted to create this theatrical academia, which Tricia has coined, with fewer restrictions than TED. “We’re constantly thinking about how to improve, change the narrative, make a difference in the world and give women voices as well,” Brouk comments.

Brouk and Broderick allow each other to do their part and make the show come to life. “I am a theatre producer, film maker, a creative, so I am the Executive Producer of the show and of all the talent and the casting,” Brouk says. Broderick’s role is completely different. “I’m great with community building, marketing, tech, visibility,” she smiled. “I create the website map, create all the social media profiles, introduce the speakers to each other and help to fill the seats and put it all together.” They make the big decisions without getting in one another’s lane to put on a show. “We come at it from different points of view with the same goal, which is to entertain our audience, transform our speakers and build a community,” Brouk clarifies.

Speakers Who Dare differs from TED Talks in many ways. Brouk and Broderick emphasize the main difference is their theatrical academia for this series, which makes it one of a kind. This time around, they have more of a creative license and is choosing to give those with daring ideas and voices a platform. “I want to be able to give speakers who are saying the things we are thinking a safe place to do that,” Brouk says. Broderick picks up Brouk’s answer, to share a few other benefits. “We’re not restricted to showing videos during the [event][and] Tricia can put on a whole razzle-dazzle show [that will] take things up a notch,” she explains. In addition to their lineup of daring speakers, they want to build a team of sponsors who dare as well. “When a sponsor comes on to Speakers Who Dare, we can promote them [and] that is something you cannot do with TED,” Brouk clarifies.

The series will take place in an intimate theatre. It will not only enhance the creative space, but also make the performances intimate. “If you’re a Broadway show [or] TED talk lover, you’re going to [learn], be inspired by these talks and then be incredibly blown away that you get to see Broadway performers,” Brouk says. Performances will take place in the morning and afternoon shows, such as Elphaba singing Defying Gravity from the musical, “Wicked”.  “If you buy one ticket for the whole day, you get to see all the speakers that have been selected,” Brouk excitedly shares.

Though Speakers Who Dare is inclusive of men, it has a female slant. The announced speakers are listed below:

Marc Cordon – A Revolution Of Joy

Mari Carmen Pizarro – The Impact Of The Self-Imposed Glass Ceiling

Jason Harris – The Power Of Storytelling

Dr. Kristina Hallett – Watching A Talk Happen (speaker will ask the audience for an idea)

Tracey Wik – The Influence In A Zip Code

Rachit Kansal – We Are Abusing Our Planet

Rocco Cozza – The Practice Of Kindness

Stephanie Simpson – Artists Can Save The World

Theresa Nguyen – Immigration: A Lack Of Access To The American Dream

Sarah Nannen – Being A Renegade Widow

Alexis Fuentes – For The Love Of Hate

Terence A. Monahan – The Importance Of Neighborhood Policing

Marla Schultz – Being An Accidental Advocate

George Andriopoulos – (Not Just) For Profit

In addition to the preview of speakers above, Brouk has also casted two more speakers for the show who will not be coming in prepared with talks. “One of them is going to ask the audience for an idea and talk right there – talk about daring!” she happily expresses. “The other one is a channeler [who is] going to sit down, read the room and then talk.”
The speakers not only get to perform, but are also provided with a stylist, photographer, a copywriter, and more. They are required to come to tech rehearsals as Brouk and Broderick plan for the big day. In doing so they can receive feedback and work directly with them. SWAAY is expanding their resources as well.

Each performer also has the chance to write op-eds for SWAAY, as well. “It’s about being daring, innovating, creative, [creating an] impact and legacy,” Broderick says. “The [speakers] will always be part of our family and our legacy.”

PARTNERSHIPS WITH SPONSORS WHO DARE

SWAAY is one of four sponsors who dare. Brouk and Broderick agree that the partnership with this publication is important. “We wanted to be able to marry an online storytelling platform with an in-person and alive storytelling platform,” Brouk starts off.
“[On] SWAAY people express themselves in the stories they’re telling. Speakers Who Dare is doing the same thing.”

In addition to SWAAY, Binge Networks is another sponsor that will be the host of all speaker series content. “There is a Speakers Who Dare TV channel [and it’s] important to me because we wanted our speakers to have a greater reach than just YouTube,” Brouk says. “It’s a massive platform for our speakers.” Recorded talks will also be shared on Apple TV, Sony, Roku, Google Play, and more.

The end goal between this dynamic duo is to put on a great show with a great set of speakers. Right now, they are in the process of licensing their brand for upcoming events. “There is a lot of power behind women coming together, collaborating and lifting each other up,” Brouk says. “That’s what Jamie and I do for each other, for all the people we work with.”

“It’s about being daring,” Broderick says.

“It’s about being daring, innovative, creative, [creating an] impact and legacy,” she goes on. “The [speakers] will always be part of our family and our legacy.”